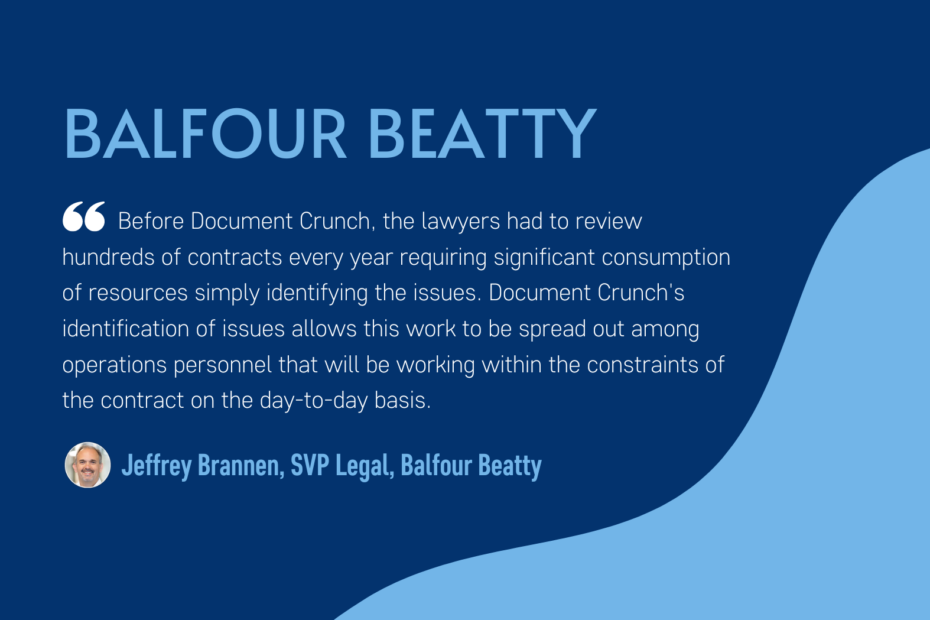 Being a lawyer for a major general contractor comes with many challenges. The organization often relies on this individual to take a bird’s eye view of the enterprise’s risk profile, and to create strategic systems and processes to manage risks most effectively. The prevailing sentiment from management is “don’t hire a bunch of lawyers (a/k/a overhead) to work here, but instead put in systematic checks and balances, and training, so we can manage this risk with minimal overhead.” However, most of the enterprise risk relates to the execution of construction projects, and for many construction companies, there are indeed a lot of projects. Leading contract reviews in preparation for bids and negotiations are a core part of the in-house lawyer’s job, but it is also necessary to work with project teams to formulate bid strategy, get operations buy-in to proposed approaches, etc. And that is all during the preconstruction phase of the work; after preconstruction, the day-to-day issues that arise on construction projects often lead to project teams calling their lawyers for on-the-spot contract guidance. This creates a real challenge for lawyers to manage strategic initiatives against being inundated with inbound requests from bid proposers, project executives, project managers, operational leads, etc. The typical in-house lawyer often struggles to carve out the time necessary to focus on higher level strategic initiatives, because of the day-to-day, project- related issues that arise.

Jeff Brannen is Balfour Beatty’s Senior Vice President and Chief Legal Officer for its Texas and Arizona Buildings team, and he faces similar challenges every day. The Texas and Arizona team has generated over $1B in revenue annually pre-pandemic, and Jeff is charged with overseeing the legal risks for entire portfolio of work which includes currently includes office buildings, hospitality, residential towers, K-12, healthcare, and office finish-out. Jeff is a key advisor for fifteen project executives and operational leads. As such, he is always inundated with managing the very active bid activities. The process of reviewing the contract with project teams was consuming dozens of hours of Jeff’s time each month; and staying so involved in these project contract reviews meant that his time was not balanced to focus on larger or more strategic areas of risk mitigation, like project peer reviews.

Still, even with this investment of time and resources, Jeff, like corporate counsels or the main reviewer of contracts in most construction companies, always suspected a detailed contract review was not as great as a priority for the project team as it was for him. In general, getting project teams to dig in and engage on these issues is always a challenge for the construction industry, and Jeff’s situation is no different. All in-house construction attorneys or other executives who oversee risk understand that developing project- level engagement in the contract is critical as a risk management strategy, so as to effectively manage issues that arise on projects day-to-day or owner demands at project meetings, as examples. But having project teams take ownership of this contract review has proved difficult because the legal jargon within contracts both bore the project teams and make the contracts difficult to interpret.

Jeff was able to solve much of this pain by implementing Document Crunch into his and the project teams’ workflows. The time savings alone is compelling, but Jeff is most proud of the more collaborative dynamic that has now arisen between the legal department and the operations team.

Like many big contractors, Balfour Beatty has a contract review checklist that is required to be filled out in conjunction with bidding and/or negotiating a job. This is a critical part of its risk management approach because it allows management transparency into specific risk sections of the contracts that the teams are pursuing, but also invites a collaboration between operations and legal, as the team works to structure the best possible approaches under the circumstances. However, this process can become quite onerous, a time vortex (keeping lawyers or key executives from other pressing tasks), and teams would consistently need additional guidance and coaching. That is the plight that most lawyers or executives face when managing contract reviews, and Jeff’s experience (below), was no different:

What was frustrating about the process for you?

Jeff: “We have a huge checklist to go through. The problem is that every construction contract is different. Most people modify [industry standard construction contract forms] considerably…. Project teams have trouble reviewing the checklist against a contract that they don’t know. The project teams need to understand the contracts but there was no efficient way to help them identify issues during the review process. In the past, the checklist was simply maintained on a spreadsheet, and while I generally trained the teams how to search for issues, the general practice was for me to be the source of issue- spotting and guidance. And there is a lot of time spent in issue-spotting throughout a contract, especially with our extensive contract review checklist.”

How much time did this contract review process take?

Jeff: “On average, pre-pandemic, I could be doing between six to eight contract reviews per month. Each review meant a four-hour meeting with the project team to go through the contract and fill out our checklist. This was the process for every project we bid, after being shortlisted. We get shortlisted a lot. I estimate that I would do this with 100+ contracts per year.”

Was there anything else frustrating about this process?

Jeff: “Due to other demands on my time, I would sometimes open the contract for the first time in these contract review meetings. I didn’t have adequate time to review the contracts before meeting the team. And I sensed that the teams were similarly not prepared. That is because contracts are difficult for them to digest when they see a new one once every couple of years, but they similarly are constrained with time commitments. The end-result was that these meetings would become a page-turn of the contract, reviewing it against the checklist, together, with me guiding and leading them to issues in the contract. In theory, it would be much better to have the parties come to that meeting having reviewed the contract and with the necessary context. It would make the meeting more efficient and collaborative and allow for some creativity when addressing issues. I know, for me personally, it would allow me to get some context outside of just the issues on my checklist, and that would be an optimal way to review a contract.”

Why do project teams even need to understand a contract?

Jeff: “Aside from having buy-in as to the strategy for negotiations, operations must be able to manage and live with the agreed-to contract, every day. When the project team is delivering the project on behalf of the owner, they are constantly dealing with day-to-day issues. Things like, ‘when do I have to give notice,’ ‘what do I do if something happens onsite,’ etc. I always say that the operations team needs to know the contract better than the owner to be the best advocate for the project goals. In that way, the team arrives ready to deal with issues raised in the owner meetings. It cannot just be the lawyer in the back office who understands this stuff or things will get lost at the project level. This only leads to lost opportunities and misunderstandings.”

Jeff began implementing Document Crunch in late 2020. Document Crunch was able to take Balfour Beatty’s contract review checklist and create an automated process where the user can now be pointed (hyperlinked) to the contract provision which deals with the issue presented in the checklist. The issues and corresponding hyperlinks can be generated by Document Crunch’s software in a matter of moments, versus the several manhours previously needed to find the issues in the contract. In other words, Document Crunch quickly guides users to the relevant provisions in the contract that are helpful to resolving the issues they seek to spot, thus allowing them to then decide whether what they are now seeing in front of them is in line with their policies or requires further discussion.

Jeff has given his project teams access to Document Crunch so that they can drive this issue-spotting process independently, rather than relying on him to do a page-turn at their review meetings. With this AI-powered tool providing teams assistance, they can more efficiently review contracts, and answer the checklist prompts, all before meeting with Jeff. This, in turn, allows Jeff to review informed work product rather than do the page turn when meeting with project teams. Additionally, this product allows Jeff to do a thorough front-end review of the contract outside of the meetings, fostering a more productive and complete team review.

Are there any specific metrics you can point to which are beneficial when using Document Crunch?

Jeff: “Document Crunch has allowed us to shorten the meetings at Balfour Beatty. The average meeting with project teams have gone down from four hours before Document Crunch, to two hours with Document Crunch. I am now doing more with less due to the time savings I have gained from this. I can concentrate on other things now that require my attention. By increasing my bandwidth due to less time reviewing contracts, this also balances the need to bring in more lawyers to service our growing business.”

What is the driver for this time savings?

Jeff: “Document Crunch has also made it possible for the project teams to do a good job reviewing the contract in advance of meeting with me. Project teams are coming in prepared versus unprepared. They have more acumen around contracts and can partner better with me when we are doing risk reviews of our contract. The project teams have become extension of legal department. The flow of discussion with teams has changed, and they seem to understand more of what is going on in the contracts. By giving them a tool to help them review contracts, they are coming into these meetings more proactively and engaged. I am now reviewing their good work product, which takes much less time than me leading the issue spotting. Most of the time savings is attributed to the issue-spotting now being automated by Document Crunch, which allows us to analyze the issues, rather than waste time spotting the issues.”

Putting aside metrics, how has Document Crunch helped you realize any personal or business objectives?

Jeff: “It feels like I have more team participation and ownership of the contracts we are looking at. It makes me feel comfortable that I am not the only one in the contract who understands the issues. There is more of a team effort around the contracts which ultimately results in better project delivery for our clients. Document Crunch’s ability to allow for the project team to be engaged is a big benefit.”

What is the biggest reason you would recommend Document Crunch?

Jeff: “Document Crunch can spot issues faster than people. Letting it do that work for us solves the problems I talked about.”